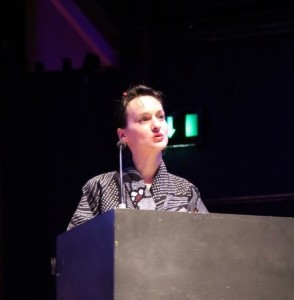 Esther Jiménez Herráiz is a practising Spanish architect, critic and researcher based in London. She graduated from the Superior Technical School of Architecture of Madrid in 2004 winning an international award for her final Thesis.

In 2004 she founded an architecture practise called Spacethinking. She remained there as a partner for more than four years, leading a variety of architecture, strategic design and branding projects. Several of these projects received first prizes in Spanish and international competitions and were also widely published in books and magazines. As a member of the group of young Spanish architects called FreshMadrid, founded in 2006, her work has received international exposure. Recently she has been invited as a guest architect for juries and reviews at The Bartlett and at the Rensselaer Polytechic Institute School of Architecture in New York.

With 20 years of professional experience as a creative and designer, Esther has worked in Spain, the United States, Brazil, Mexico and the UK in prestigious firms such as Herzog & de Meuron, Skidmore Owings and Merrill, Kohn Pedersen Fox and Allford Hall Monaghan Morris. She has worked on a variety of competitions and project types including residential, hospitality, commercial, retail and transport infrastructures around the world.

Esther is the founder of FakeSpace – a blog specialized in film and architecture and the creator and director of both AHMM and LDA Film Forums curating a monthly film and giving talks in relation to the projected pieces.